With the fall season long over, it sure has been a while since anyone at GS has heard the triumph of a brassy 500 Fight Song or the thrumming of the drums through the air, and it’ll be a long time until anyone does, that is, except for anyone who has walked into room 316: the band room.

Ms. Jamie West has been the director of marching band and the maestro of the band room for almost 15 years, and before that was herself involved in her school’s marching band at Saltsburg; she believes the marching band is essential to the school. Not only is the band the largest student organization, but according to West, it is more valuable than some classes.

“I think that what kids learn in marching band is so much more valuable than notes on a page or marching on the field or even putting on shows every week,” West said. “We teach them to be good citizens, and we teach them to be responsible. [Musically oriented] kids are generally the more successful kids. And I think it has a lot to do with not only the musical skills we’re teaching, but also those soft skills, like being an organized and put-together person.”

The band, as disorganized as it may sound in 316, is a dynamic group. There’s drumline, the flag-twirling majorettes, the various instrumental sections and dance team, who all act like their own families, but are all able to cooperate to perform. This diversity gives students the opportunity to experiment with different roles throughout the years.

“If we didn’t have band, it’d be hard to explore different kinds of art,” Sierra Flanders, a junior, said. “And we don’t have just marching band. We still have summer concert band and jazz band.”

The GS band doesn’t compete, but that doesn’t stop some of the members from finding a real meaning in the marching band, as well as its counterparts, like the jazz band or orchestra. Some say it would be accurate to describe the band as a family.

“All the guys in drumline are like my big brothers,” junior bass drum Maddy Kaufman said. “I love being around them so much.” 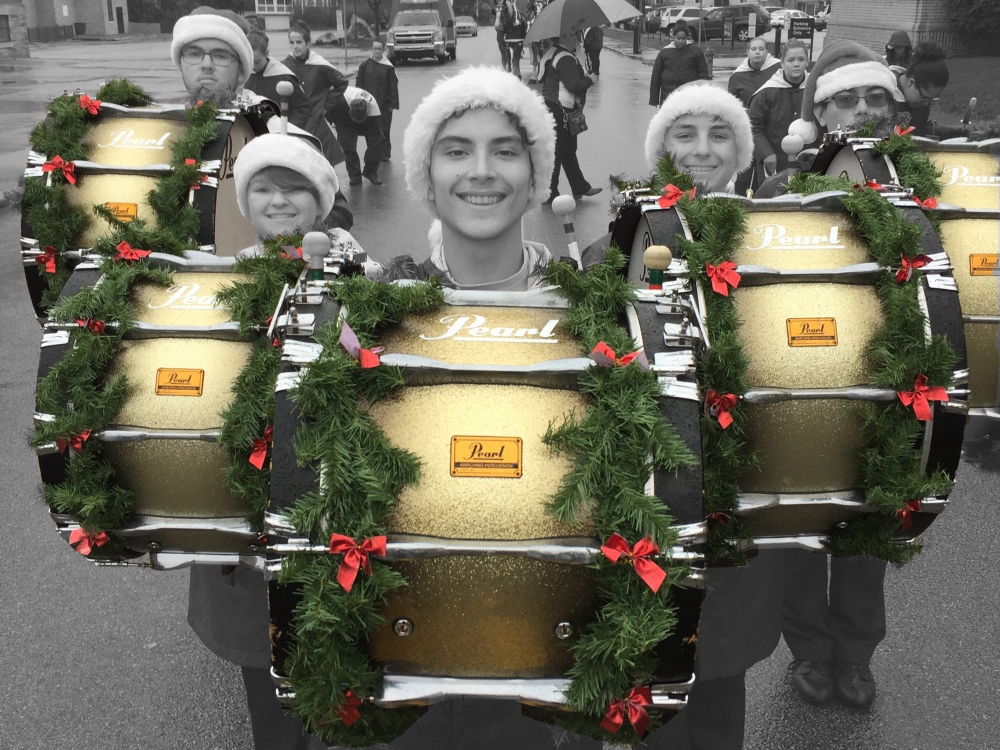 Kaufman picked up the flute in 4th grade in hopes of transitioning to the piccolo (the name amused her), but in 7th grade she was inspired by lessons to switch to drumline. Since, she has manned the bass drum.

Kaufman’s opinion is not unique to drumline, however. Despite holding a drastically different role, junior Emma Skidmore of the dance team agreed with her.

“I would definitely say we’re a family,” Skidmore said. “I mean, we’ve really been through the ringer together.”

According to Skidmore, “the ringer” is the rain-or-shine philosophy of the school band, such as playing out in the freezing cold rain at late-fall football games, and band camp, which happens for two notoriously sweaty weeks in August before the football season begins.

“And we’ve done fun stuff, too,” she said. “We’ve gone to Disney together; this year we’re going to New York. So I’d say we’re really are a family.”

Skidmore tried out for dance team her freshman year and quickly learned that “the band trip,” as it is called, is the largest perk of being in marching band. Hauling every member to Orlando to visit Walt Disney World happens to be a particular favorite among band kids.

Flags collected by various band members hang below their arrangement of band T-shirts  on the primary wall of room 316. Photo By: Jules McBride

“We went to Disney World, and we performed,” junior and former flute Robert Dietrich said. “But it was a super long trip, and there was only one day we performed. The rest of the time, we got to enjoy ourselves.”

Dietrich was a long time flute in marching band, but decided to commit to musical and his part-time job at Taco Bell. Uniquely, Dietrich has been on the inside, but he also understands the view from the outside. When asked about misconceptions that the outside students may have about band kids, Dietrich expressed concern about students not joining due to a fear of commitment.

“I’d imagine that people think that it’s super rigorous,” he said. “Or you have to be really dedicated, and if you’re not a super crazy band nerd, you’re not gonna have fun. But that’s not the case at all.

Dietrich made clear that he didn’t mean to say that marching band was a blow-off.

“You have to try,” he said. “But you don’t have to commit your whole life to it.”

“I think some kids might think they have to be super, super good at an instrument, or that it’s every day, or that there’s more time commitment than there actually is,” she said. “We practice two days a week. Sometimes we add a third, but only maybe twice [per year].”

The band students and Mrs. West agree that joining the band is not handing over one’s entire life to an instrument. In fact, there are many students who join the marching band as a manager. In this position, they act as a sort of logistics worker, but according to West, many who later pick up an instrument end up trying out for a seat.

Even among the pure instrumentalists, there are still many who branch out or even multitask. Flanders, who in fourth grade picked the trumpet “because it looked the easiest,” provided some examples. 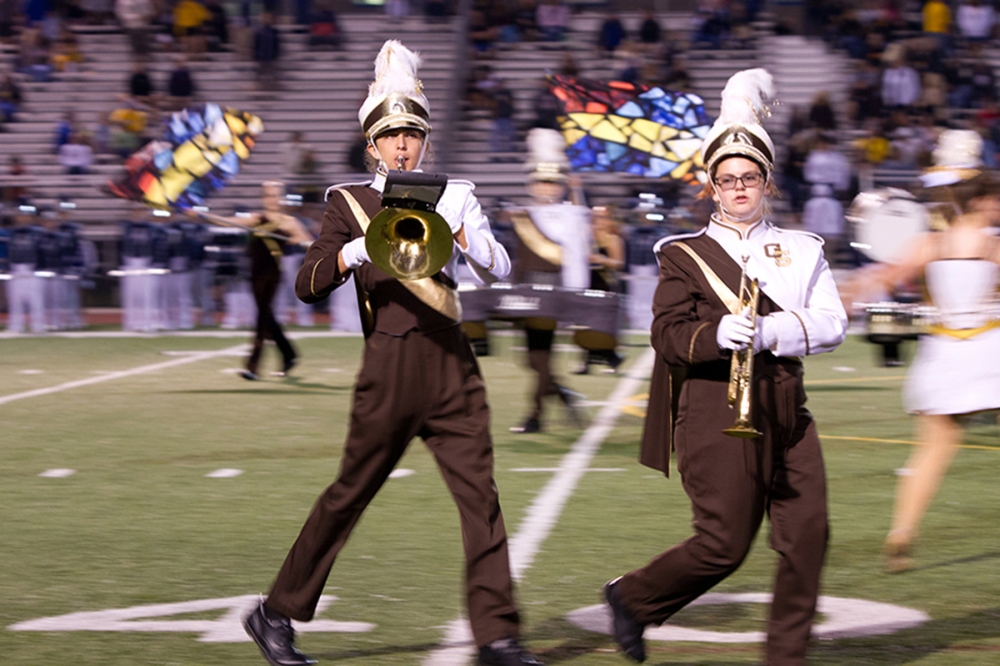 There are even students who fill the roles of both a band member and cheerleader.

“There are a lot of games where they have to switch between being in the marching band and being a cheerleader,” Dietrich explained. “They’re on the field playing their instrument in their cheerleader uniform, and then they go back and start cheering. Crazy.”

As a whole, the band brings a form of self-expression and family to the students who join it. It’s easy to see by the number of students like Flanders, Kaufman, and Dietrich who have been involved since the get-go.

“I’ve played flute since 4th grade, so do the math, that’s like seven years,” Dietrich said.

As one can imagine, the band is always busy making GS livelier with parades, pep rallies, and their usual presence at Offut field. Currently, concert band is is filling room 316 with the sound of preparations for their Coffee House this May, where the cafeteria will be graced with casual entertainment in what could be described as an “open concert.”

“It’s not like a concert where you have to sit quietly and clap at appropriate times,” West said. “The music is ambient, and it’s just a really nice night.”