The Great Dress Code Debate has roots dating back to 1969 when students showed up to school wearing black armbands to protest the controversial Vietnam War. However in today’s day and age, the conversation has shifted. Every year, schools around the country face backlash for their dress codes as students cite unfair or discriminatory treatment.

“I don’t know that we’ve had anyone [feel] unfairly targeted,” Principal Mr. David Zilli said. “We try to inform them we’re trying to maintain a sense of safety here and if that means addressing something, it’s not about who they are, it’s about what they have on.”

“We’ve always been understanding of what the current trends are in clothing but also need to understand there are some parameters in terms of making sure students are covered,” Zilli said. “There were days in the past when shorts had to be fingertip length and we just know those types of clothing can’t really be purchased that much anymore. We’re not looking for parents to go out and buy a completely separate line of clothing for their students to come to school.”

While the goal of a dress code can be argued – whether it’s to promote professionalism and safety or restrict expression – schools can agree on wanting the focus to be on learning.

“I think what we’re looking at is to be respectful of self and others,” he said. “We could enforce dress code all day, every day and our goal here is for students to learn and walk away from here future ready, prepared for the world beyond GS.”

The Alameda Unified School District (AUSD) in Alameda, California has instituted an “anti-dress code” that begins with, “students can wear.” It goes on to allow students to wear articles of clothing that may be an issue at other schools including midriff baring shirts, yoga pants and hats.

This “anti-rule” could be in response to the multiple instances of students feeling like the dress code was being used to discriminate against them due to other factors like their race, gender or religious beliefs. The scandals are countless and seemingly out of hand, spanning from a Texas dress code violation video showcasing exclusively female students to an African American student facing the police after not removing a bandana.

“I usually vouch for the students that are getting in trouble for their clothes because honestly, I don’t think it’s that big of a deal,” senior Kenny Shea said.

Shea doesn’t see a controversy about the dress code at GS and has never had a problem with it.

“It’s not like anyone gets in a lot of trouble for not dressing appropriately,” he said. “The only thing that really happens is that they ask you to change.”

Solving dress code violations and the discussion of school uniforms go hand-in-hand, but that doesn’t always seem like a viable solution.

“I’d rather express myself through my clothes,” Shea said. 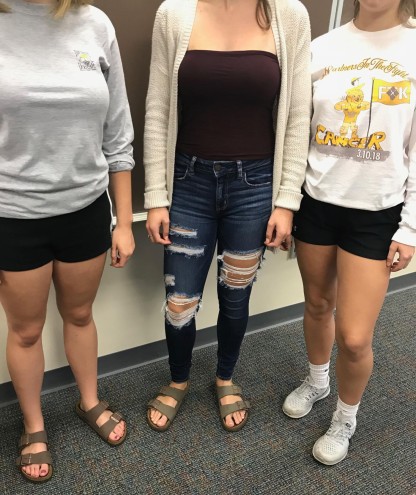 While he has few qualms about it, other students are frustrated.

“There were a lot of other people with no straps at all, so bare shoulder, or shorts that were extremely high,” senior Christine Holcombe said when she explained how she felt unfairly treated because of her shirt straps. “It’s kind of like, ‘What am I doing wrong? Why don’t I get accepted?’”

Even though Holcombe can feel defeated by the dress code, she acknowledges that it isn’t all bad.

“I feel like it’s a good rule to have some type of dress code regulation but we need to expand it a little bit,” she said. “When we have extremely hot days, we’re going to want to wear tank tops because it’s so hot.”

While GS aims to keep the focus on education and not the dress code, it doesn’t always seem that way to the students.

“I was already being pulled [from class] for something but then they stopped me before I could even get out the door and said, ‘You need to change and if you don’t change, you cannot go back to class or you have to put something on top,’” Holcombe said. “I ended up having to wear a jacket for the rest of the afternoon.”

She has also noticed differences in dress coding between genders.

“Guys, their shirts, can be more inappropriate with the designs,” Holcombe said. “I see different people walking around with guns on their shirts [but] with girls, I feel like it’s a lot different.”

Though the dress code may never be perfect, the goal is to strengthen the attention on education for all students.

“There’s definitely some good parts about it because some people are very inappropriately dressed,” she said. “I think that’s a good part that we do have a dress code in place but I think it needs to be revised.”